10 Sept 2014
I’m still getting used to the chaos generated by two boisterous little boys. After another restless nights sleep we’re not as resilient as we’d like. This morning was a blur

of laughter mixed with tears and tantrums.

Sonya was keen to hike up Runyon Canyon for some family exercise.  Trouble started in the car on route to the walk and just as we arrived, little Banjo had a meltdown that only mummy could fix. Sonya sent us all on ahead so she could calm him down.

The climb follows a dirt road up into the hills. Dave was reminded of M.A.S.H and we couldn’t resist singing a few bars of the theme tune. I sent Dave on ahead; he was itching to stretch his legs after being cooped up in the studio so much lately. Fox held my hand and we walked and chatted together. His four year old little legs did such a great job of keeping up.

It wasn’t long before Sonya and Bernie caught up to us with Banjo who was as happy as ever. It was baking hot under the morning sun so we didn’t linger at the top. It had taken more out of me than it should have. Probably a combination of jet lag, heat and dehydration. 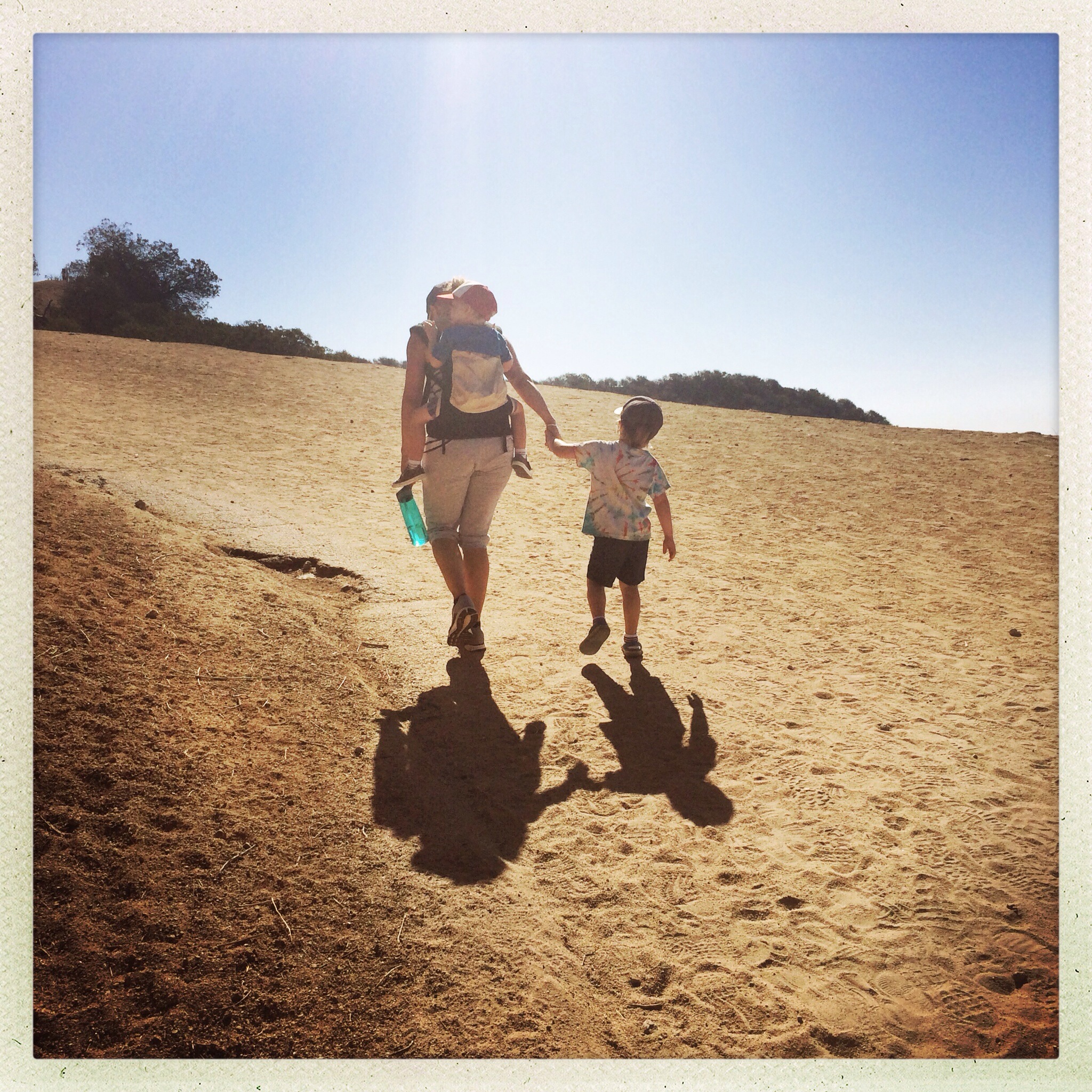 Later that morning after cold showers and breakfast, we jumped in an uber taxi and headed to LACMA. Our directions were lost in translation; I’d called it the ‘Art Gallery’, and when we pulled up at the address, he said “Why didn’t you say ‘Museum'” We’re both really looking forward to exploring the collection here. But we arrived to find it closed. Doh. Closed Wednesdays.

We were carless and stranded in a city where no one walks anywhere. I remembered that the La Brea Tar Pits were next door so we headed there mainly to escape the heat while we worked out Plan B. I’d been here with Mum, Sonya and the kids last year and found it interesting. I pointed out the tar pit off Wiltshire Drv as we walked past and told Dave what I little knew about the place.

It turned out for the best in the end; the tar pits are extraordinary. They’ve pulled out thousands of ice-age fossils of all kinds of strange extinct creatures. Woolly Mammoths, Sabre-Tooth Tigers, Dire Wolves, and my personal favorite the Ground Sloth. And it’s still being excavated. They found a pair of intact mammoth tusks which it a world first in North America, according to our guide, it made the news. It was amazing. We kept thinking that Jonny would love this place.  Dave announced “This has been a highlight for me so far!”

We asked reception for a local restaurant recommendation which we found easily. It was a lovely atmospheric grill bar complete with timber paneled booths and old movie posters. We settled into a booth giggling at how perfect the place was and promptly ordered a bottle of wine.  “Let’s spend the rest of the day right here!” Dave ordered baby back ribs and I had the Tuscan Mac & cheese. Both were predictably delicious. Beer and wine and you and me time!

We walked back through the La Brea tar pits to see the active dig sites and then continued on to The Grove to pick up some gourmet sausages for the BBQ tonight.

Back at home I spent time with Fox teaching him how to ride his new scooter while we waited for Jo and Pepper to arrive.  That evening we moved up to the roof terrace, for a BBQ with the kids under fairy-light. During the meal Bernie was invited to an audition while we will be in Palm Springs. I felt for him, having to pass up the opportunity.

Sonya is stressed and tired. I wish I could spend more time with her, perhaps in the car tomorrow?

This girl can party