31 Oct 2014
“This place is a giant aviary” David was sitting in the velvet armchair with a book open in his lap. I enjoy listening to his morning musings as he gazed out over the village rooftops to the castle beyond. I could hear twittering, and rolled over to see birds zipping about in the sky. “Robin redbreast, seagulls, jackdaws, blackbirds. They just socialise and flap around. Maybe this is bird utopia.” He paused. “I reckon if I was a bird, I’d live here.”

It was a short drive north through a pastel and luminous countryside, before the we reached the tidal causeway across to Holy Island. We were heading to Lindisfarne Castle, a beautiful Edwardian holiday home in a converted fort.

We walked through the tiny village, which seems to survive entirely on the Island’s visitors, to the Lindisfarne Priory ruins. St Cuthbert (634-687 AD) is a prominent figure in early Christianity and is the patron saint of northern England. His feast day is 20 March. I suggested to David that we head back to Picklepants HQ for a family feast to celebrate.

The Holy Island’s parish church is built in the grounds of the ruin with a small and ancient grave yard between them. The 13th century ruins stand picturesquely with the stone work weathered into undulating patterns. It’s amazing any of the structure survives  considering it’s exposure to the elements for hundreds of years.

We ambled quietly amongst the remnants of the cloister, the kitchen and bake house. A huge open fireplace and chimney were still standing and we imagined the heat a fire this size would generate.
“I can hear them” imagined Dave listening to their chants and the sound of the huge bake house.
The wells were covered in black metal grates, but show a well to David, and he’ll want to look deep inside.
“Do you think they threw bodies down there?” He joked, creeping me out. 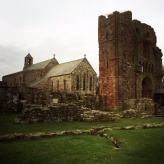 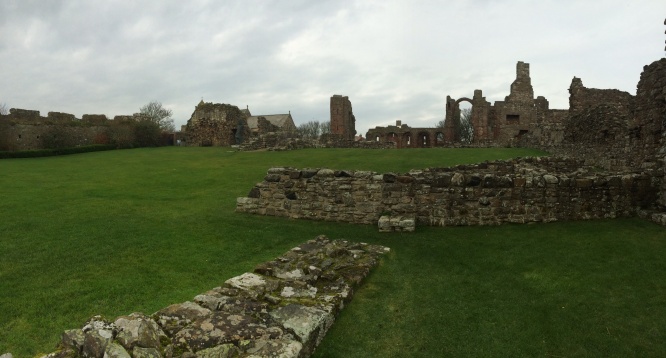 At the far end of the silvery bay, Lindisfarne Castle was a pale shadow on the horizon and beckoned us onwards. We have little memory of visiting Holy Island in 2001. My strongest memory is of the dining room in the castle, with its vivid blue wall, and I was itching to revisit. “Come on let’s go!”

Walking back through the stone village and out again, the path hugged the bay and provided a dramatic view as we approached the castle. What a beautiful place. The sky was shimmering with the sun’s effort to break through the cloud cover. A cold wind whipped off the North Sea and blew the cobwebs from our minds. We loved it. There is something exhilarating about a brisk wind when out walking. 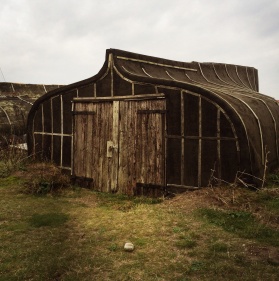 The wind picked up just as we were climbing the narrow stone steps from the Portcullis to the Lower Battery. We laughed and leaned into the wind enjoying its pressure.

“This is turning out to be a spectacular day!” Exclaimed David as we stood looking over the spectacular Northumberland coast. “It’s a Turner painting” he said looking up at the sun illuminating the fast moving clouds. A solitary seagull drifted over our heads. Bamburgh Castle was a barely visible ghost on the beach. I didn’t notice it until David pointed it out. I couldn’t photograph it on the iPhone, and for the first time on our trip, I missed my real camera and it’s zoom lens. 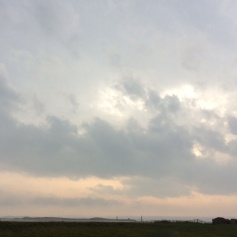 The fort was converted into an austere and beautiful holiday home by Edwin Lutyens, an Arts & Crafts architect, for Edward Hudson, Founder of Country Life magazine. Hudson discovered it while on holiday in 1901 and bought it from the crown. With white-washed walls, herringbone red brick floors, dramatic corridors and stairwells, huge fire places and window seats, we could live here just as it is. And the dining room! The deep indigo blue wall against grey stone bricks, brass chandeliers warmed by the patterned brick floor. No wonder it became ‘Hudson’s favourite place to eat, drink, debate and be merry.’ 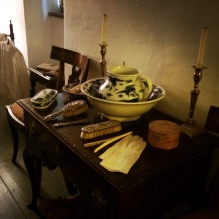 Out in the grounds is a walled summer garden, designed by Gertrude Jekyll. Back into the wind we headed down the castle mound and across the grassy field to the garden.
“We need to invest in wind and water proofs!” I shivered from the exposed field. The walled garden provided little shelter for us, but the plants seems to be fine. It’s a summer garden so the beds were mainly bare. 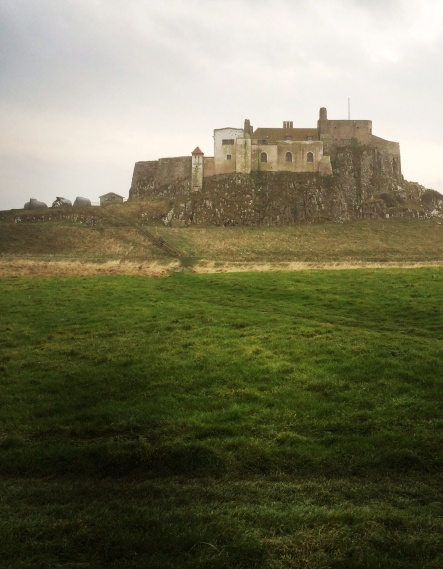 The wind eased off as we walked back around to the bay, and headed back to the village.
“Well, that was beautiful!”
“Are you having a good holiday?” I asked in jest
“The best!” 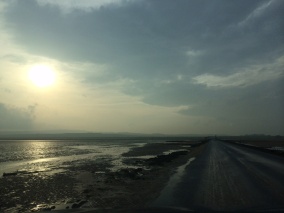 2 thoughts on “LINDISFARNE UNDER A TURNER SKY”