30 Nov 2014
Living in London, we made good friends with Veronika (a Swiss Architect) and her husband Philipp ( a German Ad-Man). They’re living in Bern now and we were looking forward to catching up with them this afternoon and meeting their young son, Matto (3).

David went for a morning walk to Thunersee (Lake of Thun) while I stayed in bed, all warm and cosy. He sent me some beautiful photos of the lake under the moody sky.

We bought Half-Price train ticket passes from the friendly staff at the Thun Bahnhof, and then jumped the next train to Bern. We love the trains in Switzerland: they’re clean and comfortable and run like clockwork. Bern’s train station seems to get bigger each time we come here. After losing our bearings for a minute and retracing our steps, we finally emerged into the center of one of my favorite cities in Switzerland.
“Look at the tram interchange: That roof is new.” I pointed to the elegantly curved glass canopy opposite. It looks like the Capitol of Switzerland would be a ‘livable’ city, as they say.

With plans to meet our friends under the clock tower, we had half an hour to explore the Christmas Markets. Pine fronds and fairy lights decorated the timber stalls and the nutty sent of roasting chestnuts lingered in the air. We strolled past stalls selling hand made decorations, lights and candles, winter woollies, clothes and bags.

I bought a Lebkucken for Mum and Dad from this stall.

At 3 o’clock under the clock tower, we greeted our friends with hugs and kisses.” It’s been too long!” Matto, sitting aloft on his Farher’s shoulders, gave us a shy tentative smile. Veronika laughed and said he won’t be shy for long.

We wandered down a main street of this wonderfully medieval town, to the Berner Munster (Cathedral) and the terraced garden behind. Perched high on a hill the views are down to the Aare river and the low-lying streets below. Veronika told us that the people who live down there, by the river, can’t get insurance and live there at their own risk. Staring down at the fast flowing Aare, I remembered my Dad telling me that when he was a boy, they would jump into the river in a rubber tire and float from Thun to Bern. Now that would be fun! 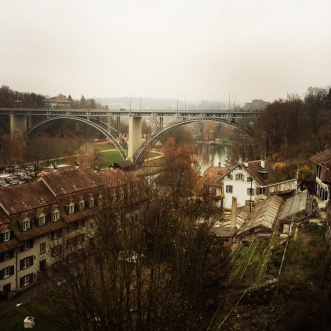 Soon we were all freezing and in need of warming up, so headed to a toasty and warm cafe. Hot chocolate was the perfect antidote to the cold and soon I could feel my core body temperature return to normal.

We were planning to watch the light and sound show projected onto the Swiss Parliament House, before going out to dinner. Strolling through the Christmas Markets, I bought a traditional Lebkucken (gingerbread) for Mum and Dad. I wasn’t sure if I would resist eating it, before arriving in Brisbane for Christmas!

By now it was dark and we gathered in the Bundesplat (the square in front of Parliament House), with the growing crowd. We stood in a little circle chatting as the cold started to creep into our clothes. Suddenly the lights went out and the classical building was plunged into darkens. The crowd ‘Oohed’ and then hushed as the show started. It was in Swiss-German so we couldn’t really follow the storyline, but we could still enjoy the music and the visual spectacular.

Here is a link to a movie trailor about the show: Rendes-Vous Bundesplatz
It was really well done, but we have been spoiled by Sydney’s Vivid Festival that covers most of the city around the harbour, including the Opera House and Harbour Bridge: Sydney Vivid Festival 2014 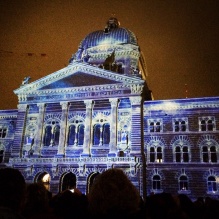 By the time the show finished the frozen night air had invaded our souls. We were frozen. Poor David wasn’t wearing enough clothing and had lost his core of heat. It was Matto’s bedtime so Veronika went home to settle him with the baby-sitter while Philipp took us to the Kornhauskeller for a glass of wine while we waited for Vero to join us.

Next we caught a bus up to Altes Tramdepot, a traditional Swiss restaurant in the old tram depot. We order traditional meals Rosti for me and the Berner Plate for David; meals designed for the cold, that’s for sure!

Berner plate: Sausages and various meats, boiled potato on a bed of sauerkraut. Not for vegetarians.

It was a great evening catching up with old friends and experiencing a night out in Bern with the locals. We can see that living in Bern really suits our friends. On the walk back to the Bus we made plans to see them in Sydney one day. And of course the commute home to Thun, even late at night, went like clock work. We love the public transport system in this country. How I long for it in Australia!