04 Dec 2014
‘What’s the opposite of vertigo?’ There isn’t a single word, but there should be. I love heights, particularly mountain summits and observation platforms. It must be my Swiss blood.

Following on from yesterday, we boarded a train to Interlaken Ost again. This time we headed into the Grindelwald Valley and changed to a narrow gage cog-train to Kleine Scheidegg (2061m). Thankfully we broke through the low cloud cover at Grindlewald. Our smiles greeting the blue sky and mountains above.

The familiar tremor of cog wheels keep us company as the little train trundled up the steep track. It felt almost as steep as a roller-coaster. The track twists and turns and double-backs to climb the mountain, providing us ever changing views of the mountains ahead and the valley below. We practically had the little timber carriage to ourselves so we could change sides to take in the best of the view as we climbed towards the base of the Eiger’s infamous North Wall.

During the winter season, this area is buried in snow and is a thriving ski resort. I remember staying in a chalet here with my family. My fearless little sister twisted her knee badly learning to ski. Looking out the window, I wondered if it was any of chalet’s we passed now. 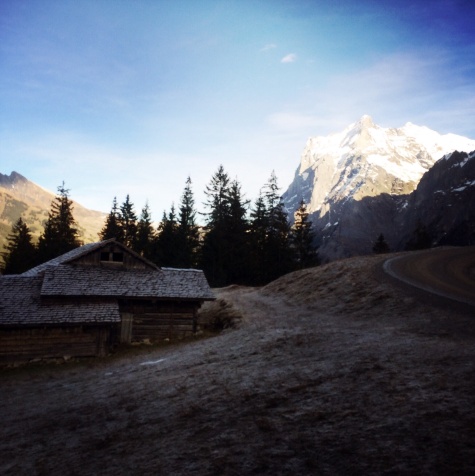 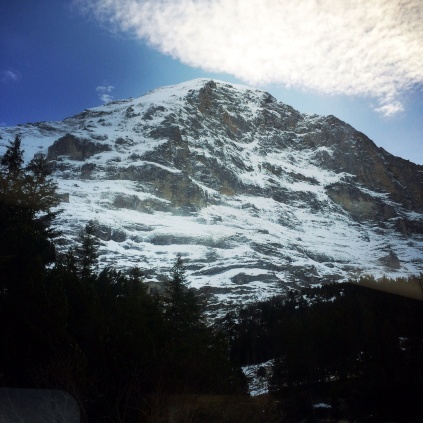 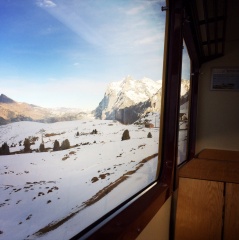 Kleine Schidegg was covered in a layer of brilliant white snow and people were out enjoying the sunshine. We climbed down from the train and crossed the tracks to the sun deck behind the station and discovered a man cooking sausages. 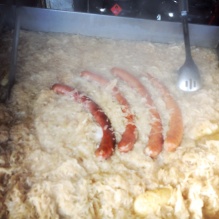 ‘We have to get one!’ We weren’t hungry but you can’t give up the chance to have a grilled sausage in the mountains. ‘Let’s share one.’ I suggested to David who already had his wallet out and had joined the queue. We ordered a veal sausage served with a slice of traditional bread and a scoop of rosti. I found a seat at the long trestle tables in the sunshine and waited for the sausage- I mean, for David. We scoffed it down so quickly, I forgot to photograph it for Dad! (Sorry Papali, you’ll have to use your imagination.)

Or here’s a link to a post from Cooking The Books of a similar sausage. The photo below is taken from the same link. 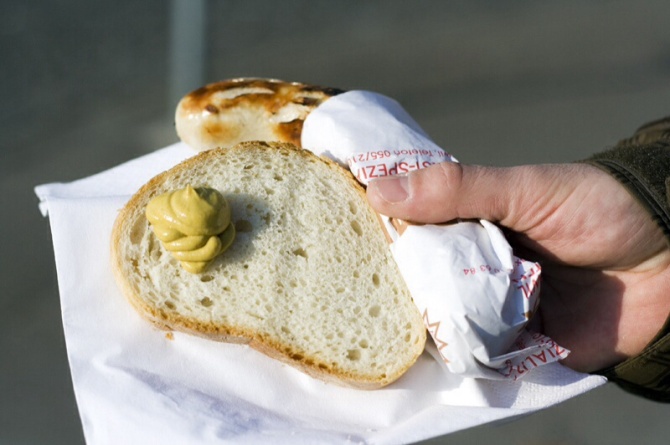 This is the sort of sausage I’m talking about. It’s a Kalbsbratworst.
Image source: http://www.cookingthebooks.typepad.com

The ski season hasn’t started but Kleine Schiedegg is open for the train interchange to Jungfraujoch (3823m), the highest (and yet underground) railway station in Europe. One day we’ll come back and do this journey to the top of Europe. But today we wanted to get out and walk in the snow and to take a closer look at the Eiger (3970m)

The village was surrounded by glistening snow fields about 150mm deep. Heading towards the Eiger we soon found that the snowfall had frozen. It was a strange sensation crunching through frozen snow and the sound reminded me of childhood visits. A couple of Japanese families had hired toboggans and the kids were taking turns sliding down a rough and frozen road.
‘That will hurt when they come off.’ I said to David sounding like an old lady. But they were clearly having fun, so good on them.

We crunched our way past them and followed the path that ran alongside the train tracks. As we approached a rise, the path forked and we followed the direction with less footprints leading towards the Eiger. The sounds of laughing followed us up the mountain; along with the smell of gravy.

It was difficult going. We had to stomp through the ice layer to get a foot-hold. But if I stomped too deeply I would sink and snow piled into my summer ankle boots. I changed tactics and followed directly in David’s footprints; mine also lacked the grip of his new ‘best-boots-known-to-man’. At this point I abandoned hopes of a longer walk.
‘Why didn’t you pack your winter boots?’ he chuckled watching me struggle.
‘Because they’re so heavy and bulky,’ and I needed room for heals. Anyway for one day in the snow, I was having too much fun to care.

We crunched onward. The Eiger loomed over the rise looking deceptively small. The village disappeared below and we were left surrounded by nothing but mountains. Following the saddle we continued towards the North Wall stopping to admire these magnificent giants.

Eventually we came to a snow capped ridge that revealed an up-close view of the north face.
‘Which route would you take?’ Dave asked quietly resting a hand on my shoulder and looking up at the massive cliff face. I inspected the ridges and crevices for a moment. I remembered seeing a postcard showing the three main routes but I couldn’t see any of them here.

Behind us clouds were gathering between two peaks and we didn’t like the look of them. Years ago, when we were sledging up here, the weather changed abruptly. Suddenly we had been engulfed in a storm. Unlike now, we were fortuitously close to the train station. 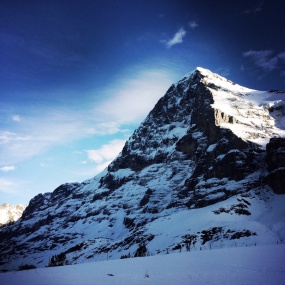 Turning around we followed the ridge in the general direction of the mountain pass. Where the ridge emerged from the shadows the snow had melted making it much easier going. We stood side by side looking down into the sun filled valley and watched as the shadow crept over the sleepy village below. It was impossible to resist turning back to gaze once again on the peaks around us. And to keep an eye on the weather brewing. 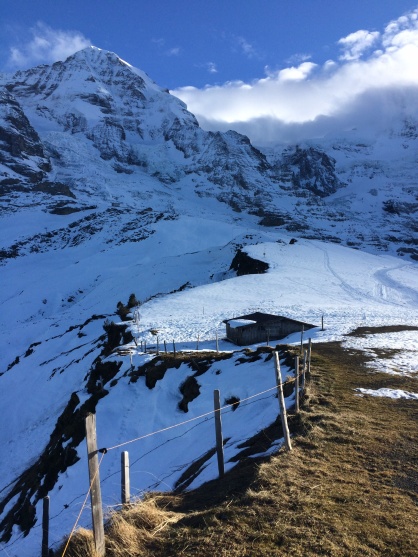 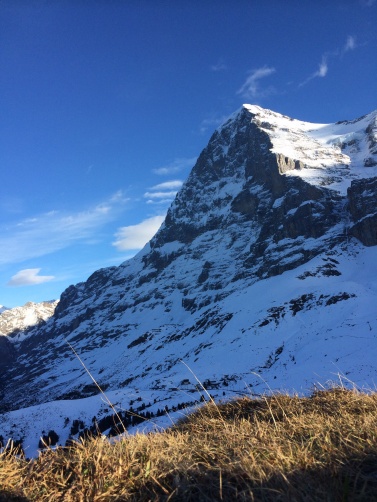 The problem with a toasty and warm train, is that the freezing air really bites when disembarking. We had decided to stop in Grindlewald for dinner before heading home. After walking up and down the quaint main street we chose the restaurant of Hotel Kreuz & Post. It was close to the station and we planned to stay put until our train arrived on the platform.

I liked the dining room with its traditional timber paneling and lace curtains. It was filled with locals playing Jass, a card game that Mum and Dad used to play with my Grandparents and still play today. The waitress was warm and friendly and spoke excellent English as usual.

Enjoying the warmth we settled in and ordered. Even though the meals weren’t exactly what we were expecting, mine was good but David’s was a little too oily, we enjoyed hanging out here and chatted about the day. Desert was delicious, pistachio ice-cream for him and apricot kucken for me. 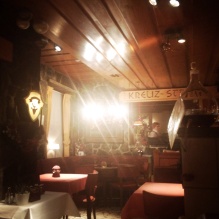 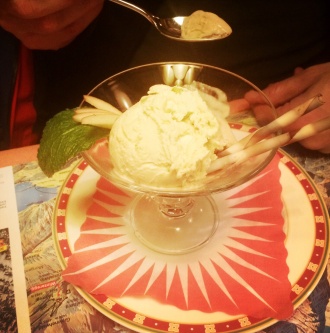 Our plan of staying in the warm restaurant until our train arrived on the platform worked like clock-work; it was an easy ride home on the glorious rail system.

Another great day among the Alps. I can’t believe tomorrow will be our last day in Switzerland already.

3 thoughts on “THE OPPOSITE OF VERTIGO”