15 Nov 2014
We could see the Cuillins from our lounge room as they basked in the morning sunshine. It seemed impossible to have such a clear still day after the storm gales of yesterday. Not knowing how long the clear Skye sky would hold, we rushed out to the car and headed back in the direction of the Cuillin mountains. The perfect day for another big walk: Coire Lagan 9km.

Our route map, from http://www.walkinghighlands.co.uk

It’s a real pleasure to drive on this Island. Yesterday the mountains loomed purple in the windows, today they were resplendent in smokey grey under a perfectly clear sky. Morning sunlight illuminated the damp grassy hills, setting them alight. What a difference a day makes.

At Sligachan we turned onto the road that snakes through the valley lowlands, skirting the range. Approaching Carbost and the Loch (of the Talisker Distillery visit) it was calm and serene today compared to yesterday’s temper-tantrum.

The road narrowed to a skinny ribbon of freshly laid bitumen that undulated along dips and rises. It was fun to drive. We enjoyed the ride out to the end of the road, slowing to a crawl as we pushed through a herd of cows at feeding time and finally stopping at a remote sandy beach. The Autumn sun was low on the horizon over Loch Brittle and crows played in the seaweed. 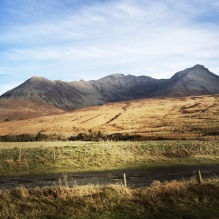 Time to boot up and hit the track. The track started on the far side of a little rugged camp ground and started up a steady incline through the familiar auburn gasses and flowering heather. The track is well maintained with a clear stony path and as we gained altitude views of the islands Canna, Rum and Eigg soon opened up. Again, it was difficult to photograph directly into the sun.

We were heading up to a hidden loch surrounded by a mountain cathedral of five Munro’s. Before long we came across a gorgeous burn, a mountain stream, that glistened in the sunlight. Black jaggered peaks skulked on the horizon. The lighting looked artificial it was so beautiful. Like a CG film location for a fantasy adventure. The path followed along side the bubbling stream for a while before leaving it and climbing more steeply towards a stone cairn marking the next stage of the walk. 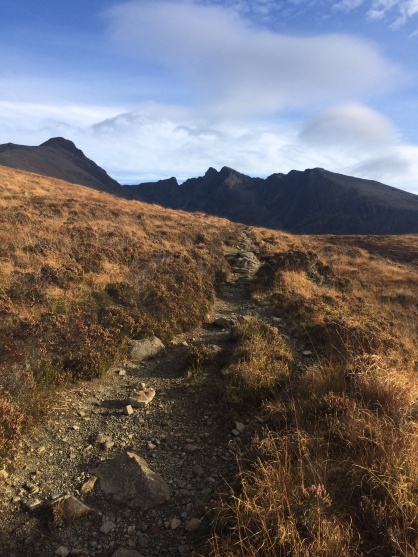 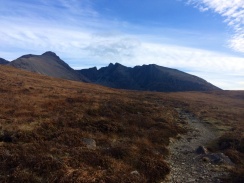 I heard a deep bark and looked up to see a gorgeous Berneese Farm Dog looking excited to meet us on the track, he was followed by an English couple about our age. We stopped and chatted for a minute. While we patted this big happy dog they told us that it’s not too difficult ahead.
“If he can do it, I can do it.” I said ruffling the big dog’s ears.
“It was a bit difficult with him” the man said looking affectionately at the big dog. 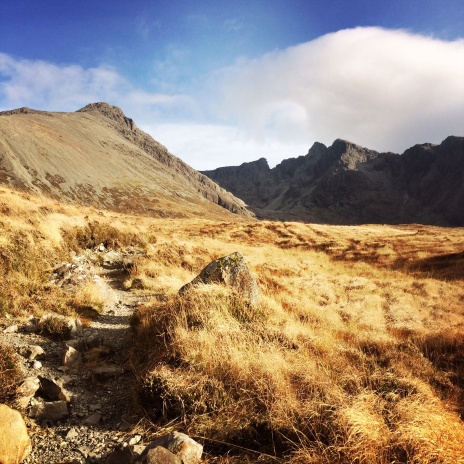 As we gained ground and drew closer, the mountains looked unnatural, foreboding; somehow superimposed. Tolkien came to mind. “We approach the gates of Mordor.” 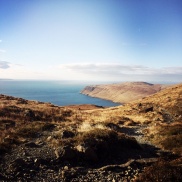 The clear track abandoned us, giving way to a bed of loose rock tumbling down between huge slabs of unusually smooth boulders. They looked like oozing lava flows, frozen in time. These strange mountains feel ancient.

Following the instructions from Walking Highlands, we climbed up the narrow space between two boulders. This felt like proper climbing and I wondered how they carried that big dog up? A burn flowed to our right the sound echoing around us. 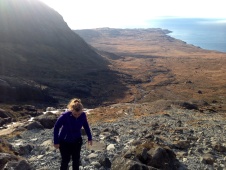 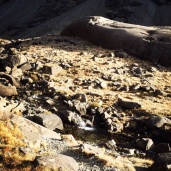 By now I was really tired; it was a struggle to keep going. My energy was spent. I sat down for a minute while Dave carried on a little further, never leaving sight of me. I was in the middle of a pep talk to myself when I looked up at David just as his arms shot up into the air. That’s it! We’re here! With renewed energy, I clambered up the final ascent until the green lochan came into view. Woo hoo! 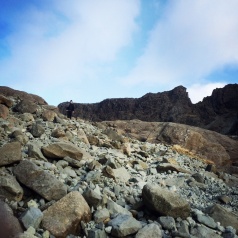 It’s been called a cathedral of mountains and we could see why immediately. Huge jaggered black looming pinnacles, and vast scree shoots swept down into the lochan. Somewhere in the distance we could hear climbers ascending a peak behind. We stood dumbfounded for a moment. 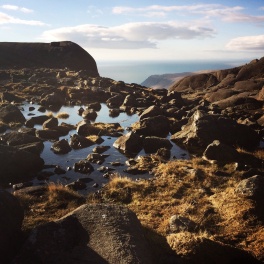 Skye’s sheep are crafty, they specialise in appearing in the most unlikely places. You think they’re mindless but they know how to scale a scree canyon.
“There’s two sheep! What the hell?” I exclaimed pointing at two white dots on the other side of the cathedral. “You can’t tell me they grazed their way up here!” I feel a bit cheated again.
“They’re sneaky sheep” offered David. “They’ve escaped the farmer.”
“How does the farmer get them back down?” Our conversation took a surreal turn as we debated what they’re doing here, as we turned and started the climb back down.

Clambering down was marginally easier than the climb up, but with the added benefit of facing the sweeping views of the coastline, over to the islands, one of clouds starting to form out to sea. 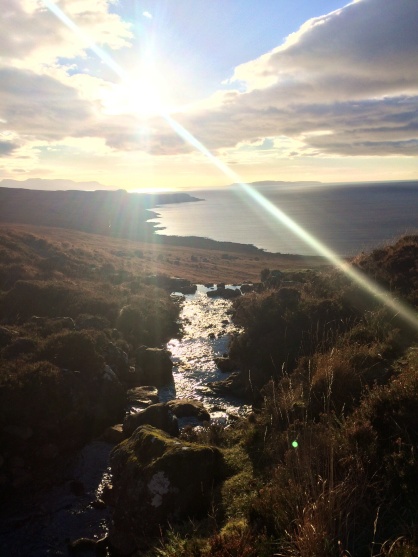 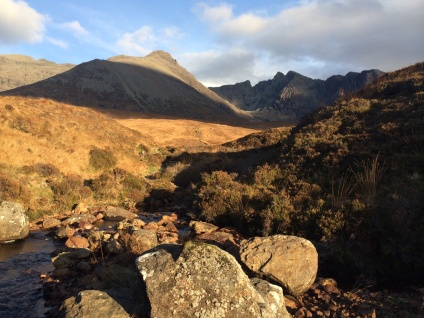 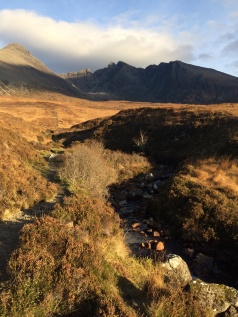 It wasn’t long after the point that we started the descent that our conversation turned to a familiar subject.
“What shall I cook when we get home?” Wondered David out loud. “How about a nice stew?”
“NO!” I haven’t met a stew I liked.
“What about a roast with all the trimmings?”
“Now you’re talking.”
“And a nice bottle of vino…” He giggled and our pace quickened unconsciously.

As we returned to the beach, the sun seemed to be in more or less, the same position as it was this morning. I can’t work out how the sun moves across the sky in Skye. We realised today, that this is the furthest north we’ve ever been.  It’s unusual being unable to predict the sun’s path. I wonder what the dead of winter looks like from this beach.